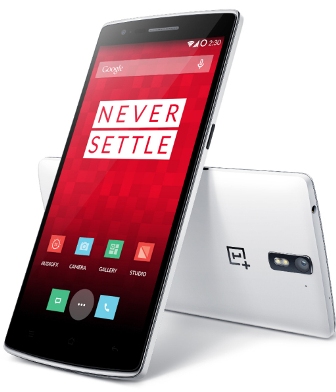 You may have got impressed with HTC Desire 816, Moto G, Moto X and other Android smartphones launched recently. OnePlus One may impress you more than all these smartphones. OnePlus One has got the best features which you may not find in any other Mid Range smartphone. This smartphone may become the best smartphone for those who have budget around Rs 19,000 – Rs 20,000.  Now I will make you know that why OnePlus One is so superb. OnePlus One has got a 5.5 inch Full HD LTPS display screen. The resolution is 1920 x 1080 pixels which means that the display screen is of superb quality. The first thing we see in a smartphone is the touchscreen and that’s why OnePlus has tried to provide the best type of touchscreen in its first Android smartphone.

I definitely expect OnePlus One to provide much better performance than what you get with the other Android smartphones available in price range of Rs 15,000 to Rs 20,000. The first reason that you can expect to get such type of performance is that OnePlus One comes with a 2.5GHz Quad Core Snapdragon 801 processor.

Do you expect a 2GB RAM in this medium budget smartphone? The big surprise is here. OnePlus been a new company is looking forward to attract customers globally and that’s why OnePlus has provided 3GB RAM in this smartphone. Still now even the best Android smartphones have got 2GB RAM and that’s why 3GB RAM is something which can make you very happy.

Not only 3G, but also 4G LTE connectivity feature is available in OnePlus’s first smartphone. You will also find WiFi, Bluetooth, WiFi Direct, GPS and NFC to be available with OnePlus One.

OnePlus One comes with a 3100 mAh battery. The expectations are that the battery of this new Android smartphone will provide full day usage at least.

Even if it is the first Android smartphone of OnePlus, it has not missed out on providing some unique special features. You will find features like always-on voice commands, gestures shortcuts, Privacy Guard etc available with this smartphone.

Still now I have got to know that OnePlus One will get available in 2 colors. It will be available in Silk White color for 16GB version while Sandstone Black color for 64GB version.

The popularity of OnePlus One has been due to many reasons. People in India can’t believe that they can get such good features in a smartphone which costs $299 only. People from other countries too have started going through this smartphone and have started comparing OnePlus One with smartphones like Google Nexus 5, Moto X and many more.

Rating for OnePlus One

I will give OnePlus One 5 out of 5 rating which is according to the Specs, features and affordable price.I am giving OnePlus One the best rating because this is the best Android smartphone in Rs 20,000, and none of the smartphones in this price range can beat OnePlus One.

I can’t say that OnePlus One may give very superior performance like Samsung Galaxy series smartphones but I can definitely expect better performance than the best selling smartphones in the same budget. OnePlus must be definitely happy seeing the thing that I and many other bloggers are giving their first smartphone such a good rating.

Let me know what you think about OnePlus One? Will this smartphone become the most impressive Android smartphone for people having budget of Rs 20,000? OnePlus is a new company and that’s why this company must be hoping good success from OnePlus One and it may have lot of plans already made for the future.

4 thoughts on “OnePlus One : Best and Powerful Android Smartphone in Rs 19,000”