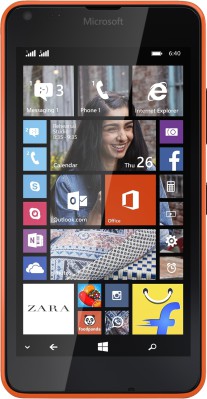 Microsoft Lumia 640 Dual SIM smartphone is available online at price of Rs 11,999, while Nokia 640 XL which comes with a larger display screen can be purchased at price Rs 15,799. All those who are fans of Lumia smartphones may definitely check out these new Lumia smartphones as they come with good features. In this post I’ll make you know all the features of Lumia 640 as well as I’ll point the pros and cons of Lumia 640. As per your budget, you can decide to buy Lumia 640 or Lumia 640 XL smartphone for yourself, but before it check out this post properly. Processor, RAM and Storage – Better than Other Lumia Smartphones?

Microsoft Lumia 640 is powered with 1.2GHz Quad Core Qualcomm Snapdragon 400 processor. It is provided with 1GB. Internal storage is 8GB only and the user internal memory is 3.5GB only which is going to be one of the cons for many. You’ll be able to get external memory up to 128GB which is also a pro of Lumia 640 smartphone.

At the price of 11,999, many have definitely expected that Lumia 640 will be provided with 2GB RAM and internal memory of 16GB.

The connectivity features which you get with Lumia 640 are 2G, 3G, Wi-Fi, GPS and Bluetooth. Lumia 640 is powered with 2500 mAh battery which will provide you with battery life up to 20 hours.

Microsoft to attract you towards the new Lumia 640 and Lumia 640 XL offers 1 year of Office 365 Subscription and 1TB One Drive storage with both the new Lumia smartphones.

Data cable is not provided in the box with Lumia 640 and some people may definitely consider it as one of the cons.

If you have decided to go for Lumia 640 and not the more powerful Lumia 640 XL, then do check out some of the best Power Banks.

Microsoft Lumia 640 is definitely a decent Windows 8.1 smartphone at the price of Rs 11,999 and we can expect that better Microsoft Lumia smartphones will get launched around the same price range.

Microsoft Lumia 640 is definitely going to be called as one of the best Windows smartphones for people having budget under Rs 15000. It will be interesting to see that whether this Windows smartphone will get good demand as nowadays most people prefer to go for Android smartphones.