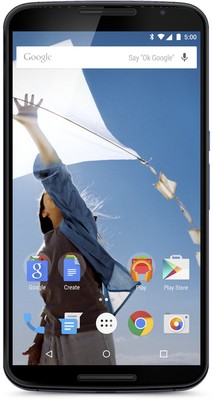 Nexus 6 is provided with a 3220 mAh battery which can provide you 2G talktime of 24 hours. Nexus 6 comes with Qi Wireless charging and Turbo charging feature which makes this high budget smartphone an impressive one.

You’ll find that Dual Speakers are available in front of this smartphone. Google Nexus 6 is a single SIM smartphone.

Google Nexus 6 comes with very large screen size of 6 inch. People who love smartphones with very large screen size may definitely like to buy Google Nexus 6. No Dual SIM option and front facing camera of 2 megapixel can be said to be the cons of this smartphone. Processor is powerful and the rear facing camera of 13 megapixel which comes with Dual LED flash may make you happy. Some good offers available with Nexus 6 may make you decide to buy Nexus 6 immediately.