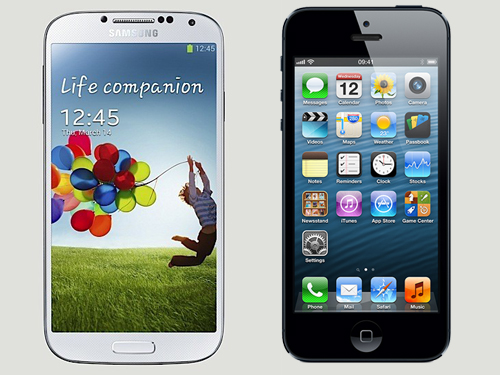 After the release of Samsung Galaxy S4, the competition in the mobile market is really going to increase. As both S4 and iPhone 5 are costly smartphones any person may think a lot that which one out of the 2 he should buy. By going through this article you will understand that whether you should choose iPhone 5 for yourself or Samsung Galaxy S4. Samsung Galaxy S4 works on Android 4.2.2 Jelly Bean operating system while iPhone 5 works on iOS 6. Some people are too crazy for Android smartphones due to superb games and Apps available on Google Play Store which may make you go for Samsung Galaxy S4. Even some people are crazy for games which are available for iPhone 5 and now it totally depends on you that whether you want to go for Android or Apple iOS.

In comparison to the 4 inches screen of iPhone 5 there is a 5 inches HD screen available in Samsung Galaxy S4. If you need larger screen then definitely S4 may be a good choice.Some people love the screen of iPhone 5 too a lot and the rate it very highly due to the quality.

Comparison of Camera Features of iPhone 5 and Samsung Galaxy S4

8 megapixel camera of iPhone 5 is rated very highly and in comparison to this you can find that the rear facing camera provided in Samsung Galaxy S4 is 13 megapixel camera.

Deciding between Samsung Galaxy S4 and iPhone 5 can be very difficult as both are very superb smartphones. You should think and properly decide that whether you want iPhone 5 as your mobile currently or Samsung Galaxy S4.