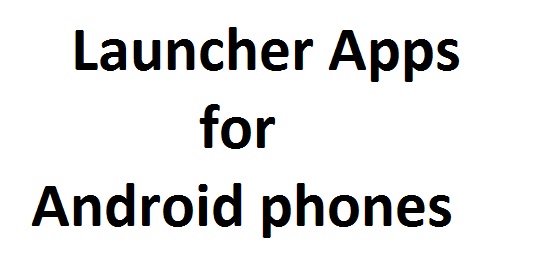 You can go through both the launcher Apps which I am mentioning and then choose one out of them or even try out both of them for once on your Android smartphone. 1. Nova Launcher – Nova Launcher is very well known launcher App for Android mobile phones these days as it is having some very awesome features. With more than 65,000 downloads this launcher App is doing very well at Google Play Store. It has got more than 65,000 downloads already and it is all because of its awesome features.

Awesome features of Nova Launcher are as follows

– Give very attractive look to the homescreen

– Option to keep a direct-dial contact on the homescreen

People call Nova launcher as superb launcher App as it has the maximum customization features which very few launcher Apps have.

Free Nova Launcher can be downloaded any time without any charges but if you want to get a better paid version of Nova Launcher then you will need to pay Rs 220.

2. Apex Launcher – Apex Launcher comes with the slogan ‘Customize your Homescreen Experience’. You may be now thinking that how your Android mobile homescreen experience will become different by installing Apex launcher. I am mentioning this launcher App because Apex is a launcher which has got around 45,000 downloads and the number will soon cross 50,000 which is very decent number of downloads.

Some of the reasons to download Apex launcher are as follows

– Known as a very fast launcher for Android smartphones

– Option to have upto 9 homescreens

Apex Launcher is available for free while the paid version ( Apex Launcher Pro) comes for Rs 219.99 and it seems that investing this amount on Pro version of Apex launcher will definitely give you the experience which you want with your smartphone.

I hope  that you would be trying up both the amazing launcher Apps soon on your Android mobile phone. If you have just started a business  then after downloading one of the launcher Apps you may try out these wonderful Business Apps for Android. Launchers make the experience more interesting and that’s why you should keep trying out new and cool launchers like Nova and Apex.