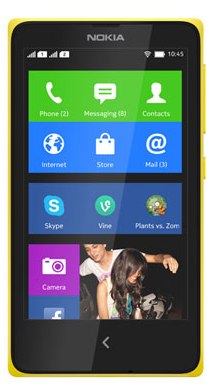 Android Apps will work on Nokia X, X+ and XL and at the same time you can also make use of Nokia and Microsoft services. This is something you may have not expected but definitely Nokia will be aiming good success with the 3 new smartphones. Now I shall move on to make you know the features and price of Nokia X, Nokia X+ and Nokia XL. Both Nokia X and X+ have 4 inch IPS LCD display screen. The resolution is 800 x 480 pixels which is very decent.

Nokia XL has much better camera features when compared to Nokia X and Nokia X+. Nokia XL has a 5 megapixel rear facing camera which also has LED flash. There is a 2 megapixel camera provided in the front of Nokia XL.

With all the 3 dual sim Android smartphones you can get external memory up to 32GB with the use of microSD card. There is no microSD card provided with Nokia X while you get a 4GB microSD card included with Nokia X+ and Nokia XL.  You can also get free Cloud Storage from Microsoft OneDrive and it will be free space of 7GB.

Many third party Apps have been pre-installed on all the 3 smartphones which work on Nokia X operating system. The Android Apps which are pre-installed are Twitter, Viber, BBM, Plants vs Zombies 2 etc.

According to me these smartphones Nokia X, XL and Nokia XL will impress those who want dual sim Android smartphone in their budget of Rs 10,000. The best thing about these smartphones is the new experience which Nokia is giving to users. You can use Android Apps as well as make use of Nokia’s services.  Nokia has tried to provide the most impressive features in its X series smartphones.

You can Buy Nokia X at Just Rs 7,705 from Flipkart and save your time.  Nokia smartphones which work on Android open source platform seems to be getting really good response from people.