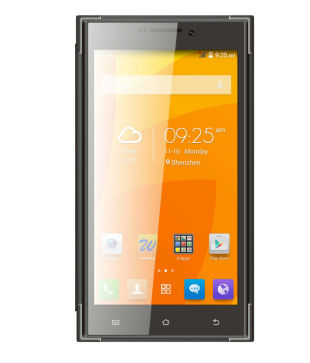 Karbonn Platinum P9 is a Dual SIM smartphone working on Android 4.4 (KitKat) operating system. Whether Android 5.0 (Lollipop) update will be provided to this smartphone is still unknown. The display screen is a 6 inch qHD IPS laminated screen having resolution of 960 x 540 pixels. Karbonn Platinum P9’s display screen has also got Gorilla Glass protection which is one of the pros of this smartphone.

Karbonn Platinum P9 comes with powerful 1.2GHz Quad Core processor. It has been provided with 1GB RAM. Even if priced low, this new Karbonn smartphone comes with internal memory of 16GB. You’ll be also able to get external memory up to 32GB with Platinum P9. 2G, 3G, Wi-Fi, Bluetooth and GPS are the connectivity features which you’ll get with this smartphone. 4G is missing, but I expect Karbonn to soon launch a 4G smartphone too in India. Karbonn Platinum P9 is provided with 2500 mAh battery. At the price of Rs 8899, 2500 mAh battery can definitely be said to be one of the pros of Karbonn Platinum P9. I expect it to provide users with good hours of talktime.

Micromax too has recently launched  Canvas Fire 4 A107 smartphone at a reasonable price. It is really good to see that companies are trying hard to attract new customers by providing best features in their newly launched smartphones.

Some friends of mine like Android smartphones with large display screen especially for playing games, watching videos etc. It’ll be that’s why interesting to see that how much popularity Karbonn Platinum P9 smartphone will get. In future, Karbonn may definitely decide to launch some more Android smartphones with large display screen. Did you like the features provided in Karbonn Platinum P9 smartphone? Do let me know your opinion about this newly launched smartphone.