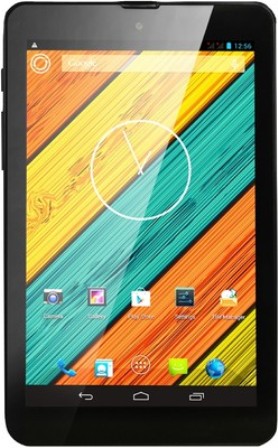 Flipkart has taken a very big step and launched its first tablet Digiflip Pro XT 712. Flipkart is one of the most popular online shopping sites in India, and that’s why it will be interesting to see the response this tablet will get. Digiflip Pro 712 is a Dual SIM tablet and it comes with many good offers. If you have been waiting for the launch of Flipkart’s tablets then you should definitely check out the features of Digiflip Pro XT 712 tablet. Within Rs 10,000 there are few good tablets available but you may not be able to find the similar specs in any other tablet when compared with Digiflip Pro XT 712 tablet.

The display screen of 7 inch has very good resolution of 1280 x 720 pixels. Digiflip Pro tablet works on Android 4.2.2 Jelly Bean operating system, and I hope that Flipkart will soon provide KitKat update for this tablet as soon as possible. Digiflip Pro tablet of Flipkart comes with Quad Core processor and 1GB RAM. Internal memory of 16GB is provided by Flipkart in its first tablet. 16GB of memory shall be definitely enough for you, and if not you can get external memory up to 32GB using microSD card.

Connectivity features provided by Flipkart in Pro XT 712 tablet are 3G, WiFi, Bluetooth, GPS and USB OTG. I am hoping that Flipkart’s next Digiflip tablet will also have 4G LTE and NFC connectivity.

3000 mAh battery has been provided by Flipkart in Digiflip Pro XT 712 tablet. As this is the first tablet of the very popular e-commerce company Flipkart, you can definitely expect to get good hours of talktime with this tablet.

Flipkart is giving special offers on its first tablet. You get free eBooks of more than Rs 2,000, 50% Discount on the cover of Digiflip Pro XT 712 tablet, Bluetooth Headset of Plantronics for free and Flipkart First Subscription of 1 month. I think that Flipkart has decided to provide so many offers on its first tablet so that it can get success. I think that Digiflip Pro XT 712 tablet will get huge success and after it Flipkart may launch many more Digiflip series tablets.

I think that Flipkart’s Digiflip Pro XT 712 tablet has pros only and no cons, as in the price of Rs 9,999 you can’t expect to get better features than this.

If you’re not sure that whether Flipkart’s Digiflip Pro tablet is the best one for you, then you can make use of Buy and Try program. Flipkart under this program allows you to return the Digiflip tablet within the period of 30 days.

Amazon’s Kindle tablets got lot of success worldwide. I am expecting that Flipkart’s Digiflip series tablets will get same type of success in India. This tablet has impressed me as I really like the idea of Flipkart launching a tablet with high end specs at an affordable price. What is your opinion about Flipkart’s first Digiflip tablet?