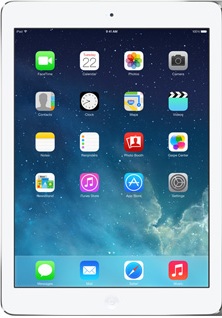 Apple at a recent event launched iPad Air, iPad Mini and even 2 different versions of Macbook Pro. Apple’s iPad Air can definitely become one of the best and most demanded tablets. This tablet packs in some of the features which are better than the previous versions of iPad. Lets check out which features may make you immediately attracted towards the amazing new iPad which is iPad Air.

iPad Air doesn’t only have superb aluminium unibody design but even the features of iPad Air are very much attractive. 2. iPad Air – One of the Fastest Tablets

The other feature which may attract many to iPad Air is its very less weight. The weight of iPad Air is only 1 Pound which makes anyone understand that how easy to carry tablet iPad Air could be for anyone.

iPad Air’s rear facing camera is a  5 megapixel iSight camera. At the front you can find a 1.2 megapixel camera. iPad supports 1080p HD video recording which may attract those who love to shoot videos.

After knowing the top 5 features one can definitely understand that the new iPad which is iPad Air is powerful, faster and lighter. Now you will be definitely able to bring more productivity in your work by buying the fastest tablet by Apple.

I certainly believe that when it comes to features iPad Air is definitely one of the best tablets. The price may be high for many but definitely investing in iPad Air may be worth for few who want a very superb and fast working tablet.