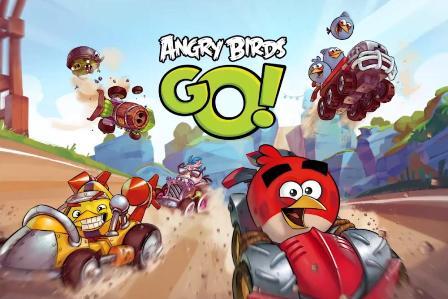 Different Characters One of the best things according to me about the Angry Birds Go game is that you get a chance to race with your favorite character. You can choose from characters like Stella, King Pig, Red, Chuck etc as a racer in this game Angry Birds Go. Check Out : Games and Apps for Christmas

According to me Angry Birds Go is one of the best games currently for Android as well as iOS. This free game definitely has amazing graphics. You can definitely see how amazing the graphics are in the above image itself. Whenever you will play Angry Birds Go you will feel that you yourself have become an animal or bird and taking part in a racing competition.

Angry Birds Go has been launched at the end of the year and that’s why I hope during the Christmas holidays people will play this game a lot. This game may definitely be popular also in the year 2014 and no Android user will like to miss out on this kart racing game.

I will give 4.5 out of 5 rating for the game Angry Birds Go. This game is very amazing and as Rovio has provided Angry Birds Go for free, it is really the best thing which could have been done by Rovio.

Angry Birds Go can be downloaded for Android, iOS as well a Windows. Once you download Angry Birds Go you can make me know about how much interesting you find the game Angry Birds Go. I hope to also get your review on Angry Birds Go game so you should download this game as soon as possible.