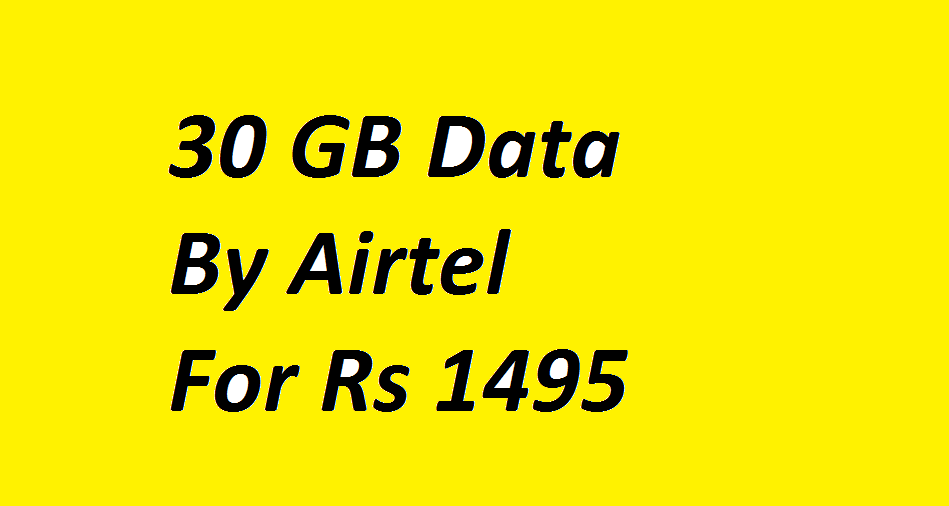 Reliance Jio is offering 20GB data + unlimited calling at Rs 1499 for a validity of 28 days. Airtel is trying to compete with Reliance Jio by launching the special 90 days internet pack at Rs 1495. Airtel understands that the competition is increasing and that’s why it is now offering more data at a lower price. If you like long term validity packs, then definitely you should try to know about Airtel’s 90 days 4G internet pack.

Airtel is calling this pack as the free data pack. Under this pack, Airtel is giving 30GB 4G data at price Rs 1495. Fair usage policy applies to this internet pack. Once you’ll use up the 30GB of data, you’ll be able to continue using the internet at a lower speed. The benefit of been able to use internet even after finishing up 30GB 4G data shall make many people go for this pack. Reliance Jio’s Rs 1495 pack is impressive as it gives not only 20GB of 4G data, but also the benefit of unlimited calling is included. The only disadvantage is that it lasts for 28 days only.

I definitely like the long term validity packs. I hope not only Airtel, but Reliance Jio, Vodafone and other companies too will launch long validity 4G internet packs.

Airtel has made this plan available for Delhi only still now, and soon it will roll out for other circles too. It will be interesting to see that whether people will go for this plan. People are now definitely going to compare the different plans that Airtel, Reliance Jio and other companies are offering.

Rs 1495 pack is going to be very beneficial for all those who want a long term validity pack and especially those who find 30GB data enough for a period of 3 months. Do let us know your opinion about this pack that Airtel has come up with for its customers.