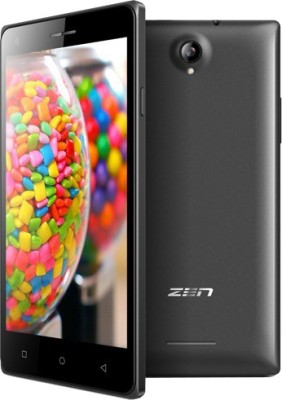 The 5.5 inch display screen is a qHD IPS display with resolution of 960 x 540 pixels. There is no Glass protection provided and you need to be satisfied as the price is Rs 4,199 only.

Zen Cinemax 2 is powered with 1.3GHz Quad Core Spredtrum 7731 processor. Spredtrum processor may not be very powerful, but as per the price you may get decent performance. Cinemax 2 comes with 1GB RAM and internal memory of 8GB. You can get external memory up to 32GB by making use of microSD card.

2G,3G,WiFi,microUSB, GPS and Bluetooth are the connectivity features provided in Zen Cinemax 2 smartphone. 2900 mAh battery is provided in this smartphone by Zen. Battery is definitely a good one as per the price which is under Rs 5,000 and many may have not expected it.

Zen Cinemax 2 supports 21 Indian languages which is something really good.

It is now available at Flipkart in one colour only which is Black. If you’re impressed with the features, then it may definitely be a good option for you as you may want to have a new smartphone in the start of new year 2016.

If your budget is even lesser, then you should go through features of Nexian NV-45 which I had posted about recently.

It is really good to see that a company like Zen Mobiles which is not very popular in India has launched a smartphone with large screen under Rs 5,000. If Zen Cinemax 2 will get success, then Zen Mobiles may definitely decide to launch many more smartphones in India. Do let me know your opinion about Zen Cinemax 2 and whether you find the price to be appropriate.