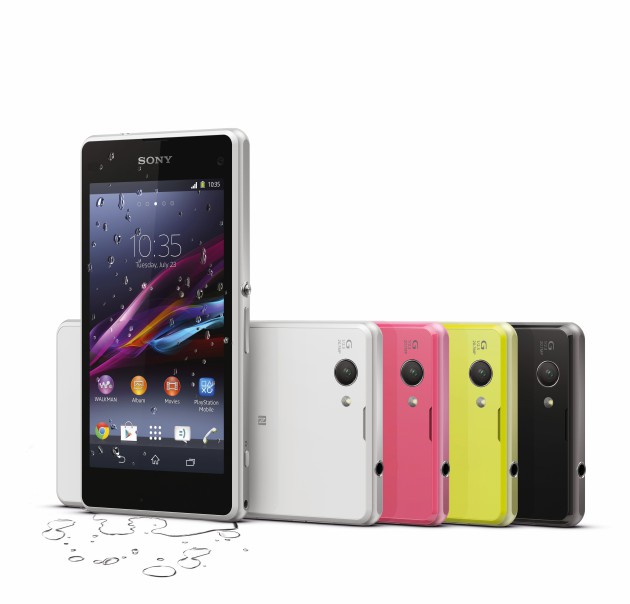 The touchscreen is of 4.3 inch size and the resolution is 720p only but it has some exciting features which may make you go for Sony Xperia Z1 Compact. Processor and RAM in this Compact Smartphone

The most amazing thing which you find in this smartphone with only 4.3 inch display screen is its camera features. The 20.7 megapixel rear facing camera is what you may have not expect with Z1 Compact. This camera comes with Exmos R sensor and you can do 1080p video recording with it.

Front camera provided in Xperia Z1 is also not bad. It is a 2.2 megapixel camera which gives you power to do 720p video recording.

This smartphone is not only easy to carry because of the small size but also having resistance from water and dust. IP55 and IP58 rating has been provided which makes it good to resist dirt and water.

Internal memory of Z1 Compact is 16GB while with microSD card you can get external memory up to 64GB. It is compact but power-packed with Connectivity features. Z1 Compact doesn’t only have 3G but also has LTE support. It also has Wi-Fi, Bluetooth 4.0, NFC, aGPS and MHL. It seems that all the connectivity features have been provided in Z1 compact even if its screen size is small.

Battery used for this smartphone is 2300 mAh battery while I was expecting a better battery with Z1 Compact as it has so many amazing features.

Is this the smartphone for you?

If you want an Android smartphone which is not difficult to carry then this is the smartphone you may like to choose. As Sony Xperia Z1 Mini doesn’t miss out on good camera and connectivity features you may find this one as the best compact smartphone for yourself.

This smartphone with 4.3 screen size, Quad Core processor, 2GB RAM, 20.7 megapixel camera will get available in 4 different colors which will be Pink, Lime, White and Black. It seems that many mini smartphones are going to be launched in this year. HTC One Mini and Samsung S4 Mini were currently the two popular Mini smartphones with powerful features and now with the announcement of Z1 Compact by Sony, it seems there will be more smartphones in this list.