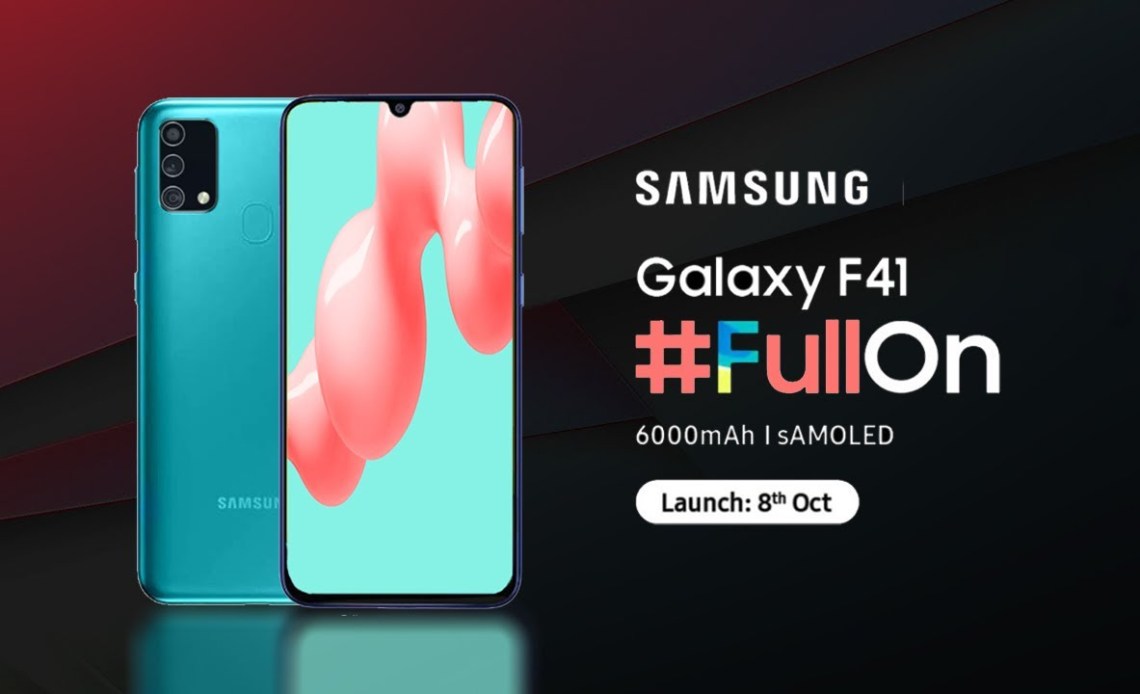 Samsung has finally announced the first F series smartphone and it is none other than Galaxy F41 powered with 6,000 mAh battery. We will have a look at its features and specs, including the Infinity-U display.

The amazing news for Samsung Fans is that during the Flipkart’s Big Billion Days sale, the starting price of Galaxy F41 will be Rs 15,499 only.  At the same time, buyers will be also available to get a 10% discount on SBI cards.

Samsung F41 weights at 191 grams, which is much lighter in comparison with Redmi Note 9 Pro Max and some other latest devices. It comes out of the box with One UI and you’ll find that is very easy to use.

The 6,000 mAh battery shall provide a very good battery life and a good thing is that it supports 15W fast charging.

Galaxy F41 comes in 3 colors which are Black, Blue, and Green.

People are going to compare Galaxy F41 with Poco X3 as it is a popular smartphone in this budget. A comparison will be also made with the other upcoming smartphones.

Let’s have a look at the crucial specifications of Galaxy F41 smartphone.

As an external memory slot is available, if I would have to make a choice, then I’d go for the 64GB variant.

As per me, the triple rear camera, 32-megapixel front camera, and the powerful 6,000 mAh battery are the pros/best features of this smartphone. I expect other companies to launch similar smartphones in the same price range, but you’ll have to wait for it. The discounted price during the Flipkart’s Big Billion Days sale may make Galaxy F41 get a huge response online.

I will recommend you to purchase this smartphone online soon so that you’ll be able to get the selected 64GB or 128GB of your choice along with the best color option.

The first smartphone of the Galaxy F series is a mid-budget smartphone. It definitely increases the competition in the price range of Rs 15,000 to Rs 20,000. Do you think that Samsung Galaxy F41 is the best smartphone within Rs 20,000?