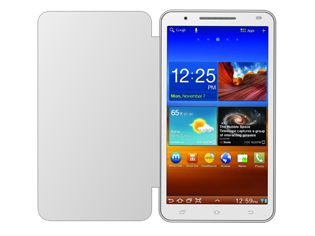 MTV in partnership with SWIPE telecom has launched a 6 inches Phablet called as MTV Volt. Priced at Rs 12,999 MTV Volt offers a lot for those who need a smartphone with large size screen and awesome features. If you have a budget within Rs 15,000 then you may definitely think to go for MTV Volt.

MTV Volt works on Android 4.1(Jelly Bean) operating system and it has a 1GHz Dual core processor. There are many other features which may make you buy this Phablet by MTV. MTV Volt has a 512MB RAM . Internal memory of 4GB and external memory option up to 32GB using MicroSD memory card is available with MTV Volt.

You can connect to MTV directly using the in-built TV player which is provided in MTV Volt and you can even find FM radio in MTV Volt which is an awesome PHABLET with 6 inches screen.

MTV Volt is a dual sim Phablet and it also comes with Dual Standby feature.

If you are going to play lot of games and Apps then definitely you may love this Phablet as it has 3,200 mAh battery which can give you talktime up to 8 to 10 hours with MTV Volt.

This Phablet definitely looks affordable and has brilliant features than many other Phablets. Lets see how it competes with other Phablets like Karbonn A30 which are already available in the market.