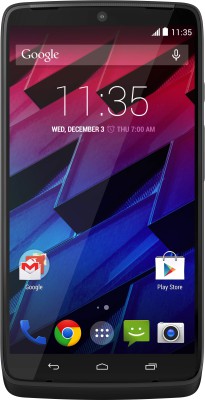 Moto Turbo smartphone has got launched at price Rs 41,999. The attractive features may have made already made you feel excited to try out this smartphone. Motorola had introduced Droid Turbo smartphone in October in US and now this smartphone has launched as Moto Turbo in India. If you can spend over Rs 40,000, then Motorola’s Moto Turbo smartphone can be definitely be the best option for you. Moto Turbo looks good and it is provided with very powerful Quad Core Qualcomm Snapdragon 805 processor and internal memory of 64GB. Motorola has got good success with Moto E, Moto G and Moto X in India. This can be one of the reasons that it may be expecting Moto Turbo too to get lot of success in India. Know all the features, offers, quick review and other details about Moto Turbo. HTC also recently announced its new high budget smartphone.

Motorola Moto Turbo comes with 5.2 inch AMOLED screen having resolution of 2560 x 1440 pixels. It comes with pixel density of 556 ppi and the display screen is also provided with Corning Gorilla Glass protection.

Motorola’s Moto Turbo smartphone comes with very powerful 2.7GHz Quad-Core Qualcomm Snapdragon processor and it is provided with 600 MHz Adreno 420 GPU. Other pros of Moto Turbo are 3GB RAM and its internal memory of 64GB. There is no external memory slot provided in this new Motorola smartphone.

Moto Turbo is provided with 2 megapixel camera. As this is a high budget smartphone, I had expected much better front facing camera than what has been provided by Motorola.

The connectivity features which you’ll get with Moto Turbo are 3G, 4G, Wi-Fi, GPS, NFC and Bluetooth 4.0.

Moto Turbo comes with powerful 3900 mAh battery. If you’re frustrated just because of the reason that your smartphone charges slowly, then you may feel happy to know that Moto Turbo charger can quickly charge Moto Turbo smartphone in 15 minutes. With the quick charge feature, you’ll be able to get 8 hours of talktime.

Moto Turbo is definitely a powerful smartphone as the processor is a Quad Core Qualcomm Snapdragon 805 processor. The AMOLED display screen and 21 megapixel camera may also attract you to Moto Turbo. Connectivity features and battery provided are also good. The only thing is that the price of this smartphone is much above than what expected. If it was priced around Rs 30,000 to Rs 35,000, then it would have definitely attracted many more people.

You can pre-order Moto Turbo now. It is expected to release in 3rd week of March.

– 10% Off with American Express Cards