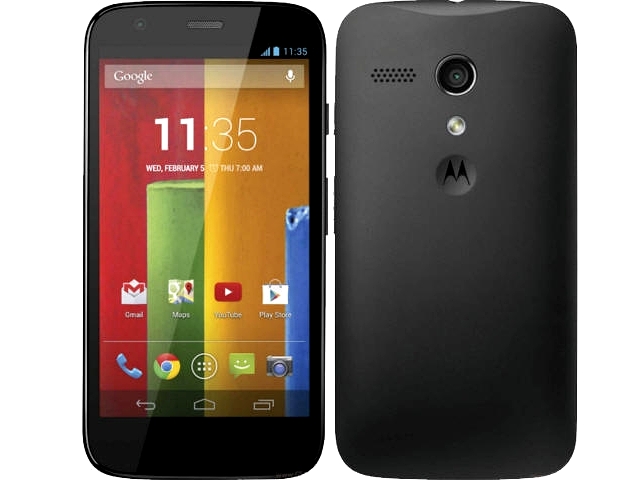 Motorola Moto E may get launch with a 4.3 inch screen. The screen size is not going to be the main attractive factor. The most attractive thing will be that Moto E is going to be the best choice for all those who want to buy an affordable Android smartphone. The above image is of Moto G. It got huge success in India because it became the best Android smartphone within Rs 15,000.

The touchscreen of 4.3 inch may have not attracted you much but the other features will definitely attract you. Similar to Moto G this low budget Motorola smartphone can be a dust and water resistant Android smartphone.

Moto G attracted many because it is a powerful smartphone. In comparison to Moto G’s Quad Core processor, Moto E is going to have a less powerful processor as it is going to be a Dual Core processor. 1GB RAM which is similar to Moto G will be provided by Motorola in Moto E. It is expected that internal memory of 4GB will be provided by Motorola in Moto E. I will be more happy if Moto E will get launched in 8GB and 16GB version. External memory card slot will be definitely provided in Moto E.

I don’t have any information about the front facing camera of Moto E. According to various sources Moto E is going to have a 5 megapixel rear facing camera. Moto G is going to have normal connectivity features like 3G, Wi-Fi, USB and Bluetooth. 4G LTE and NFC will not be provided in this smartphone as this is a smartphone which comes in very less price.

Moto E will run with the latest Android 4.4 KitKat operating system. Moto E will also be a Dual SIM smartphone like Moto G and that’s why people with low budget may like to prefer Moto E over Moto G.

1900 mAh battery is going to be provided in Moto E. I can expect that this smartphone will offer good battery life.

Specs of this Affordable Smartphone

Moto E is going to be priced less than Moto G. I am expecting that Motorola Moto E will definitely get launched below Rs 10,000. If Moto E gets priced around Rs 8,000 then definitely it can become massive success in India. It may bring a big change in India as manufacturers will now look forward to provided really good features in low priced Android smartphones. Once I will get confirm news about the price of Moto E I will try to definitely inform all my blog readers about it.

It is expected that Moto E may also get available only on Flipkart. I can expect that there will be availability of good number of smartphones this time so that people will be able to Buy Moto E from Flipkart immediately. Motorola will be definitely having the hope that Moto E may bring them more success than Moto G. If this happens then definitely other companies may have to launch some new smartphones in India.