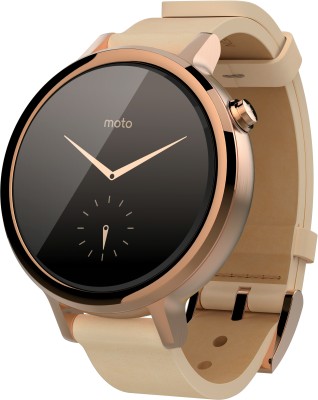 Motorola has launched Moto 360 2nd Gen smartwatch starting at price Rs 19,999. It has got launched in 5 different variants and that’s why both men and women will be able to select a good smartwatch easily. Moto 360 2nd Generation smartwatch has 3 different sizes which are 35mm, 42mm and 46mm. Motorola must be expecting that Moto 360 2nd Gen will get more sucess than the 1st Gen Moto 360 smartwatch due to the better features. If your budget is less, then checkout the affordable Huawei Honor Band Z1 which comes with good features for fitness freaks.

Moto 360 2nd Gen runs on Android Wear OS which is going to make it a popular fitness wearable among Android fans. It is compatible with Android smartphones, while there is limited compatibility with Apple iPhone. The 46mm Moto 360 2nd Gen is mainly for men and it comes with 1.56 inch display screen having resolution of 360 x 330 pixels. 42 mm smartwatch which is for men and 35mm for women both is provided with 1.37 inch screen having resolution of 360 x 325 pixels. Display screen of this new Motorola smartwatch is provided with Corning Gorilla Glass 3 protection. Moto 360 2nd Gen has got connectivity features which are Bluetooth 4.0, WiFi, Dual Mics etc. It has been provided with Heart Sensor which makes it a very useful fitness wearable among those who are health conscious.

Different sensors provided in the new Moto 360 by Motorola are ambient light sensor, accelerometer and gyroscope. It even supports wireless charging.

Motorola Moto 360 2nd Gen has got IP67 certification which makes it water and dust resistant.

Moto 360 2nd Gen is available in 4 different colors which are Black, White, Gold and Silver. Buy Moto 360 2nd variant of your choice online before the stock ends.

Motorola Moto 360 2nd Gen is definitely going to be the best option for those who can spend Rs 20,000 for a smartwatch. There are many other top smartwatches with which you may like to compare this new Motorola smartwatch. Motorola is always trying its best to attract customers by launching high quality products and already many people seemed to be attracted to this new smartwatch.