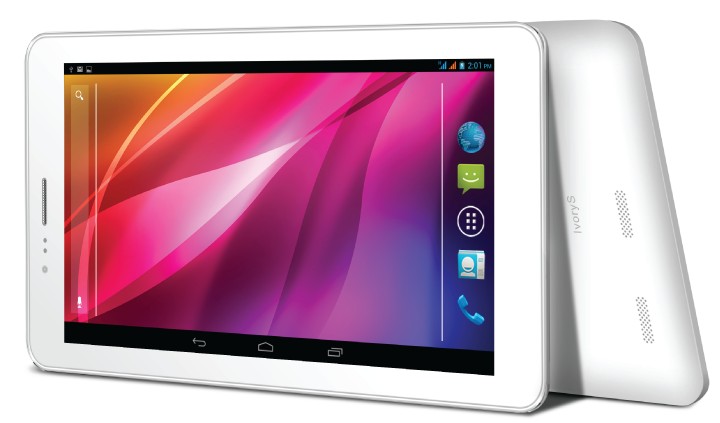 Lava IvoryS is a Dual SIM tablet which has got 7 inch screen size. The resolution of this Lava tablet is 1024 x 600 pixels which is quite decent.

This tablet may not be very powerful but definitely you will get the satisfaction according to the price. Not a Quad Core powered tablet, but Lava IvoryS is a tablet having Dual Core MediaTek processor of 1.3 GHz. IvoryS comes with 1GB RAM and internal memory of 4GB only. You can get external memory up to 32GB with Lava IvoryS.

Lava IvoryS doesn’t miss out on any of the connectivity features which you may want to find in an affordable tablet. IvoryS comes with the connectivity options which are 2G, 3G, Bluetooth, Wi-Fi and Micro-USB.

Another amazing thing is the battery life which you can get with Lava IvoryS. You can get talktime up to 8 hours with IvoryS as it is powered with 2800 mAh battery.

As this tablet is specially manufactured for teenagers, Lava Ivory S comes with many good pre-loaded Apps. The different pre-loaded Apps are WhatsApp, PayTM, EA games, Hungama Music App and many more.

What the Director of Lava International said about IvoryS Tablet?

S.N Rai, Co-Founder and Director of Lava International has said that IvoryS is a tablet especially for the youngsters. This tablet has been provided with all the connectivity and entertainment features at an affordable price.

This seems to be a good Dual SIM tablet having Dual Core processor and 1GB RAM. The cons of this Lava tablet are less internal memory and no information about software update. The pros of IvoryS according to me are good battery life, Dual SIM feature and availability of all connectivity features. We will have to wait to see the review of Lava IvoryS tablet so that we can know that how well this tablet performs.

You can Buy Lava IvoryS at price Rs 8,499 only which is definitely an affordable price. There are many tablets which are available within Rs 10,000, but all of them don’t have the Dual SIM feature like this Lava tablet. It will be exciting to see that whether Lava will come out with more affordable Dual SIM tablets.