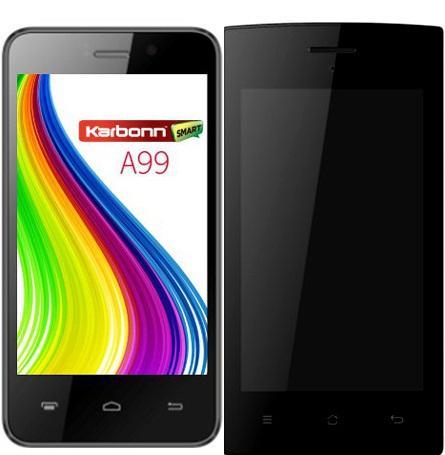 Karbonn A99 and Karbonn A16 are 2 newly launched smartphones by Karbonn. If you have low budget you shouldn’t miss out to check both the best smartphones A99 and A16 by Karbonn. Powered by Dual Core processor and priced around Rs 6,000 both the smartphones launched by Karbonn have decent features.

Karbonn A99 and A16 both come with 1.3 GHz Dual Core processor. Both the smartphones even have a 512 MB RAM.

Even if both Karbonn A99 and A16 have been priced around Rs 6,000 you get 3G as well as Wi-Fi connectivity features with both of them. You also get Bluetooth, micro USB connectivity options with A99 and A16.

Internal memory of both Karbonn A99 and A16 is 4GB. As you get external memory up to 32GB with both of them, there should be no memory issues with the new Karbonn smartphones.

Both the newly launched affordable smartphones by Karbonn which are A99 and A16 are dual sim smartphones.

Karbonn A99 is priced at Rs 6,190 while A16 is priced at Rs 5,990. Karbonn has also launched another two affordable smartphones which are Karbonn A16+ and A18+. If you have a budget above Rs 8,000 then you should go for A18+ as it comes with 5 inch screen and 2000 mAh battery. It is priced highest among the 4 newly launched smartphones by Karbonn.