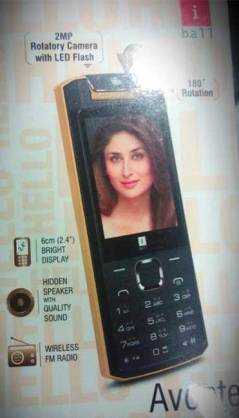 iBall Avonte 2.4G is a feature phone which you may like to buy which is mainly because of its rotating camera and affordable price. iBall has been launching low budget Android smartphones recently and now it has come out with a very affordable mobile phone which is iBall Avonte 2.4G. This feature phone can definitely be one of the best mobile phones for those who have budget of Rs 2,000. It seems that iBall is inspired from the success which Oppo N1 (Android smartphone with rotating camera) has got and that’s why  it has also launched a mobile with rotating camera.

Display screen is a 2.4 inch screen, but it is not a touchscreen display. It comes with a good numeric keypad. Other features which you get in this affordable mobile phone are radio, support for WhatsApp etc. It is really nice to see iBall trying to provide mobile phones for those who want some decent features in very low price.

iBall is getting popular for launching affordable mobile phones and tablets. iBall’s Slide 3G 7345Q-800 is a good tablet at the price of Rs 9,190. You can check out iBall Slide 3G 7345Q-800 and other tablets in the recent post in which I mentioned the tablets with best features available within Rs 10,000.

iBall’s official website is the place where you can know about all the smartphones and tablets which iBall has launched recently.