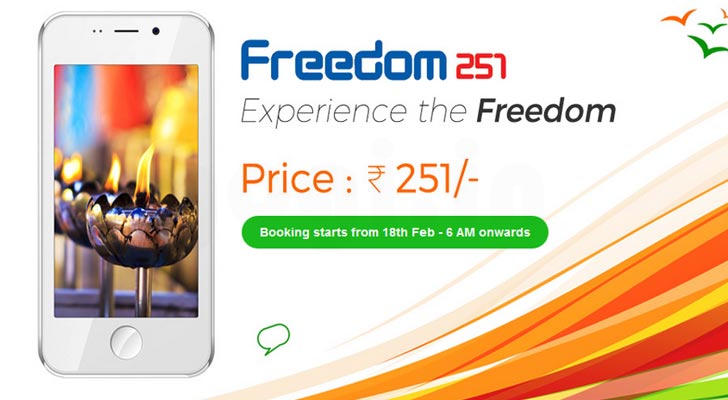 Freedom 251 smartphone launched in India by Ringing Bells has become the most popular smartphone of year 2016. Even if the delivery is going to start after 4 months that is in June, everyone is crazy to buy Freedom 251 online. The main reason for the popularity is the affordable prize of Rs 251. No one can believe that a smartphone with good features can cost Rs 251 only which is $4 USD. Know the features and the different reasons making people buy this smartphone without thinking much. Even if many people have got no idea about the company Ringing Bells, they have decided to purchase this smartphone just because of low price.Even if it is the lowest priced 3G smartphone, it works on Android Lollipop operating system making people find it as the best option as per their low budget.

When people first got to know that there is a new smartphone coming at Rs 251, they thought that it will be provided with a new type of processor. But, Freedom 251 has come as a surprise as it works on 1.3GHz Quad Core processor. Some of the other smartphones having similar type of processor are priced around Rs 5,000 to Rs 6,000.

You might be thinking that the display screen is of small size, but its not. The display screen of Freedom 251 is a 4 inch qHD IPS display screen having pixel density of 275 ppi which is definitely good asd per the price under Rs 500. You’ll be surprise to know that there is no other smartphone available within Rs 500.

It has got 1GB RAM and internal storage space of 8GB. You’ll be able to get external memory up to 32GB by making use of microSD card with Freedom 251.

It has got 3G connectivity and comes with 1450 mAh battery.

Everyone Wants to Get the Benefit

The combination of very low price and decent features has made most of the people continuously think about Freedom 251 smartphone. On the first day, the site crashed and they had to stop the booking which is because of the superb demand. Many people are surprised about the price of this low budget smartphone and that’s why they want to book as many smartphones as they can. Some People are Not Going to Buy Freedom 251

Even if most of the people don’t want to lose this opportunity to get a good Android smartphone at Rs 251, there are some who have decided that they won’t go for this smartphone. They believe that no company can sell a good smartphone at such a low price. My friend said to me that if the price was around Rs 1,500 to Rs 2,000, then he might have went for it. Some people are not buying Freedom 251 online because they think that the site is not working properly and proper information is not given about the company.

If you’re thinking to try your luck, then head on to Freedom 251 website and purchase the Freedom 251 smartphone online before the booking stops due to excessive demand. The pre-booking might be already closed due to the site crashing because of massive traffic. If you don’t believe that a 3G smartphone can be priced so low, then check out some of the smartphones priced around Rs 5,000. Lenovo A2010, Karbonn Mach One Titanium, Infocus Bingo 21 are some of the options.