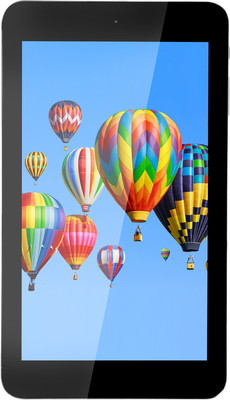 Display screen of this low budget tablet is of 7 inch IPS screen having resolution of 1024 x 600 pixels. Five point multi-touch feature will provide you good experience with the display screen even if the price is very low.

Digiflip Pro ET701 tablet comes with 1.2GHz Dual-Core Intel Atom processor. Flipkart has provided 1GB RAM in this tablet. I’m really impressed with this tablet as the RAM provided is of 1GB RAM, while many companies decide to provide 512MB RAM only in their low budget tablets. With Digiflip Pro ET701 tablet you get internal memory of 8GB and you can also get expandable storage up to 32GB. For connectivity you get Wi-Fi and USB. 3G and Bluetooth seems to be missing which is definitely one of the cons of Digiflip pro ET701 tablet. It comes with 2800 mAh battery which seems to be good according to the low price of this tablet.

Digiflip Pro ET701 tablet is available in 4 different colors which are Grey, White, Red and Blue.