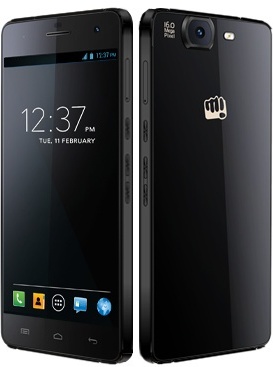 Micromax Canvas Knight A350 comes with a touchscreen of 5.0 inch and has resolution which is 1920 x 1080 pixels. This smartphone with Octa Core processor works on Android 4.2 (Jelly Bean) operating system. Design of Canvas Knight A350

Before you get to know about the powerful processor and amazing camera features of this smartphone, you shall know the design of this smartphone. Canvas Knight A350 looks very good. This smartphone has a different design when compared with some other Micromax smartphones. The power button is available on the right, which is with the volume keys.

The front facing camera is a 8 megapixel camera which shall help you in taking high quality pictures of yourself using the Micromax Canvas Knight A350.

3G, Wi-Fi, Bluetooth and GPS are the available connectivity features. If LTE and NFC was provided in Micromax Canvas Knight A350 then definitely this smartphone would have become the best Android smartphone in Rs 20,000.

Battery Provided in Canvas Knight A350

Only a 2350 mAh battery has been provided in this smartphone. As the processor is Octa Core, I was thinking that at least 2500 or even a 3000 mAh could have been provided with Canvas Knight A350.

Canvas Knight A350 is available currently only through Micromax Online Store and it comes at a price which is Rs 19,999. Some of the very useful Apps like BBM, Hike, M!Security, TrueCaller etc come pre-loaded on this affordable powerful smartphone. I hope that this post provided you info about all the features of Canvas Knight 350. This smartphone has got good reviews, and that’s why you may like to buy it soon.